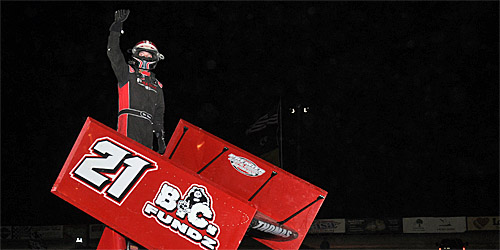 The Wheatley Chronicles – Volume III, No. 21

It didn’t come without a battle though, as the young racer from Owasso, OK, had to fight off two-time event winner John Carney II and Aaron Reutzel over the final half of the 30-lapper atop the 5/16-mile clay oval.

Thomas actually briefly surrendered the point to Carney II on the 21st lap as the lead trio raced through traffic, battling back and then wading through a pair of late red flags to secure the win aboard Robert Miller’s BC Funds No. 21.

“There were a couple of cars that were really holding me up and John snuck by for a second there, I was lucky enough to be able to get back by,” Thomas said of the three-way scramble for the lead as the final ten rounds commenced.

With Thomas back in command, a red flag stoppage after 24 laps and then another one lap later put the simmering battle on hold for a few moments.

“I don’t think I’ve ever seen back-to-back open reds like that in the final five laps, it gave me a lot of time to think about all the things that could happen,” Thomas said.

He need not worry though, as he was flawless over the final handful of rounds to put the win away.

Behind him, Reutzel battled past Carney II to take runner-up honors with Carney II settling for the show position. Mexico’s Cesar Fuentes gained a pair of positions over the final handful of rounds to claim fourth with Lorne Wofford rounding out the top five. 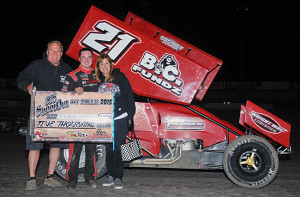 Heat Moments: Gonzales wired the field in the first heat; Cesar Fuentes was in control until swapping the lead with Royal Jones on the last lap, Fuentes held on with Jones settling for second from seventh; Reutzel rallied from sixth to second in the opening pair of corners then took the lead from Dylan Harris the next time around.

“B” Main Moments: Schure took the lead from Rick Lovelady on the second lap and raced on to a straightaway victory in the non-stop 12-lapper with Colt Treharn slipping by Lovelady for second on the final circuit.

“A” Main Cautions: One caution after six laps and then another sandwiched between the two late red flags slowed the pace. The first caution flew after six laps when Wes Wofford spun in turn four. The red flag few after 24 laps when Lubbock’s Brandon Williams slipped off the top of turn four then turned over trying to get back on track. After Robert Herrera and C.J. Hulsey both spun in turn one on the ensuing restart, one final red flag flew a lap later when Richard Wilbee got upside down in turn four with James Mosher involved as well.

“A” Main Hard Charger: Added to the field as a 25th starter among 26, Robert Herrera gained 11 overall positions to finish 14th. “B” Main winner Schure picked up seven positions to complete the top ten.