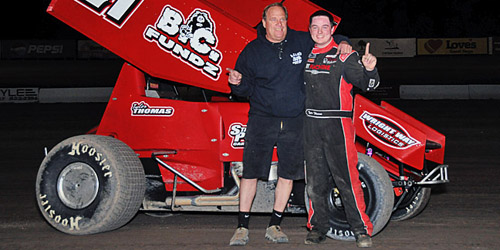 The Wheatley Chronicles – Volume III, No. 20

But, since the move of epic proportion never technically happened due to a caution flag, the young gun from Owasso, OK, scripted another outlandish way to come away with Friday night’s 25-lap preliminary win by sliding past race-long leader John Carney II on the final round to score the dramatic win.

With the triumph aboard Robert Miller’s BC Fundz No. 21 machine, Thomas locked into Saturday night’s $5,000-to-win 305 Shootout finale along with two-time event winner and El Paso native Carney II and the Alamogordo, NM, father-son duo of Lorne and Wes Wofford, another pair of past event winners that claimed the third and fourth positions.

The Wofford duo both moved up one position after apparent third-place finisher Aaron Reutzel was disqualified for a “designated work area” violation after a rousing charge from the tail following an opening lap incident that left him with nose wing damage.

With Carney II and Wes Wofford leading the way to the original green flag, sixth-starter Thomas slid all the way from his third row outside starting position up to second in the opening pair of corners and then battled past Carney II in turns three and four to lead the opening round only to have it negated for a turn four scramble that sent Jerry Gonzales pitside and James Mosher to the tail.

Reutzel, who started in the third row as well, incurred nose wing damage in the same fracas and ducked to the pit area and returned at the tail before making one more quick stop after a stoppage two laps later to rejoin the field in 21st. It was a stop later deemed a violation of track rules.

While Thomas was unable to duplicate his incredible opening-lap move on the ensuing restart, Carney II led Wes Wofford and Shawn Sander in the early going with Thomas finally working his way up to third by the tenth lap and then past the younger Wofford for second by the 15th lap.

Thomas went to work on Carney II in the closing rounds, sliding into the lead in turns one and two on the white flag lap only to have Carney II race back in front.

But when Thomas tried it again on the final lap, he made the move stick to secure the win.

“About 10 or 15 laps in, I really though we only had about a third or fourth place car but I just kept digging and was able to get there,” Thomas said afterward.

A disappointed Carney II settled for second at the line in the No. 74b entry after leading 24 of 25 laps.

Behind the leaders, Reutzel rallied from 21st to sixth in the nine-lap segment after the lap two caution and then battled past Cesar Fuentes and Lorne Wofford over the next seven laps before moving past Wes Wofford for third in the final rounds. It was all for naught though with the night’s final ruling.

Lorne Wofford battled past son Wes for what proved to be the third position in the final rounds with both locking into Saturday’s finale by virtue of finishing among the top four. Kyle McCutcheon rallied from 17th to round out the top five. 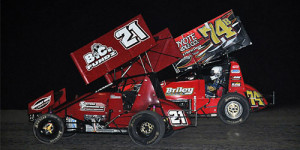 Heat Moments: After popping the engine in his No. 54 in hot laps, Art Quijano jumped in bother Aaron’s No. 52 and tagged the heat race leaving Aaron rideless. The four heats ran off with just one caution two laps into the final heat when Derek DeMartino came to a stop off turn four. The most dramatic moment came at the scale after heat one, with race winner John Carney II reportedly right on the 1,500 minimum according to officials.

“B” Main Moments: Dylan Harris paced the field for 6 of 12 laps before getting caught up a skirmish with lapped cars, handing the lead off to eventual winner Hulsey.

Lap 2 – Matt Ziehl spins to a stop in turn four. Reutzel ducks off to the pit area and rejoins the field 21st after hasty nose wing repairs.

Lap 11 – Rick Ziehl comes to a stop off turn four.

“A” Main Hard Charger: Kyle McCutcheon frequently races best after horrid prelim performances, and this was another of those instances with the Alamogordo shoe charging from 17th to fifth.