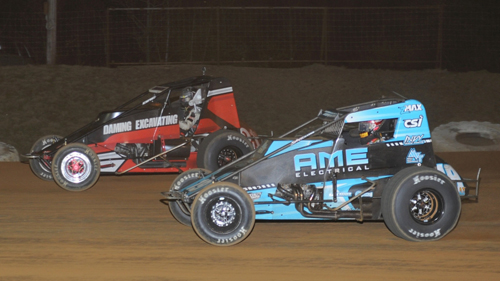 Tanner Thorson made clear his intentions to not just be known as the “top Rookie” with the USAC AMSOIL National Sprint Cars; he let it be known he’d rather be the top dog of the series as not only a contender for feature wins, but also for a title run.

Thorson (Minden, Nev.) took the first step on Friday night during the second stop on the Keystone Invasion tour in the series’ first visit in nine seasons to Pottsville, Pennsylvania’s Big Diamond Speedway, grinding his way around the outside of racelong leader Jake Swanson with 11 laps remaining to score his first career victory with the series in just his 13th career start aboard the Reinbold-Underwood Motorsports/AME Electrical – CSI – MVT/Spike/Stanton Chevy.

“This is not something in which I’d settle and be okay with just winning Rookie of the Year,” Thorson admitted.  “We aren’t here for that.  We’re here for the championship in the sprint car and the midget…”