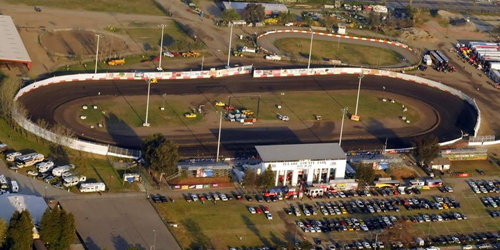 TULARE, Cal. (October 19, 2016) – Excitement & buzz is floating through the air as one of the biggest weeks in California Sprint Car racing has arrived, which means only one thing, it must be Trophy Cup time at Merle Stone Chevrolet Thunderbowl Raceway in Tulare.

The Southwest Contractors Trophy Cup is not only known for featuring some of the best racing seen all year long, but it’s also well regarded for being held to benefit one of the truly great organizations around, the Make-A-Wish Foundation. Two seasons ago Dave Pusateri & the Trophy Cup team went over the $1,000,000 mark for donations to the foundation and this weekend that total will grow even more when the 23rd installment of the prestigious show takes place.

All of the special events on the fairgrounds that help add to the Make-A-Wish Foundation pot will be held once again, including the Thursday Chili Dog Night sponsored by Taco Bravo, the Taco Bravo Fiesta Night on Friday and the Saturday afternoon spaghetti feed sponsored by La Villa Delicatessen. The post race parties run from 11pm to 1am, while the spaghetti feed goes from 12:30pm to 3:30pm. Live music will be featured with drinks available for purchase inside.

A Friday morning breakfast sponsored by the Tulare County Fairgrounds is also going to occur from approximately 8am to 10:30am. A new twist is being added to the Taco Bravo Friday Fiesta later that night, as a dancing with the stars competition will be held. Current & past racers such as Kyle Hirst, Bud Kaeding, Andy Forsberg, Ryan Bernal, Howard Kaeding, Craig Smith & others will test out their dancing skills with the crowd watching on.

As always a donation to the Make-A-Wish Foundation at the door during all the special events is appreciated. Cow Pie Bingo will also be held on Saturday, with squares available to be purchased throughout the weekend for $10 each. The winner of Cow Pie Bingo will go home with $1000.

This weekend’s action will also take place on a new & improved surface that is wider in each set of corners thanks to Thunderbowl promoter Steve Faria. It certainly passed the test during the King of the West event on October 8, with the extra room allowing drivers the opportunity to slide each other back & forth, which bodes well with the best of the best set to be on hand this Thursday-Saturday. The entry list is scattered with talent from all around, in what has turned into a true “All Star Showcase” for the west coast.

“To finally get the Trophy Cup under my belt last year was a huge deal,” Bud Kaeding commented. “Joining my dad & brother as a Trophy Cup winner is something I’ve wanted to do for a long time. This is one of, if not the biggest race we run all season so it’s something we take very seriously. Above & beyond however, it’s put on to benefit a great cause, so we hope all the fans will come out and pack the stands. The track was really racy at the KWS show and I think everyone is going to be treated to an outstanding weekend of racing at the Trophy Cup.”

“It’s been great to see the fan support continue to grow at the Trophy Cup year after year,” said Steve Faria. “The extra events on the fairgrounds have definitely turned the race into a happening and one that people mark down on their calendar every season. I know we are looking forward to it and hope everyone else is too. Dave Pusateri and his entire team do an outstanding job with everything and I know we’re honored to host the Trophy Cup for the 12th straight year.”

Tickets continue to be on sale for the 23rd annual Southwest Contractors Trophy Cup, with all seating in the house reserved during the weekend. Grandstand tickets cost $40 on Thursday & Friday and $45 on Saturday. Bleacher tickets are $35 on Thursday & Friday and $40 on Saturday. Kids 6-12 are half price and 5 & under are free. A seating chart is available at www.thunderbowlraceway.com and tickets can be acquired by calling 559-688-0909. The pit gate opens at 10am on Thursday October 20, with the drivers meeting at 3:30pm sharp.

Williams Roofing of Fremont, CA has put up the Royal Fan Draw for all 3-nights at the Trophy Cup. A trivia question will be asked and the fan that answers correctly will pull a random number (1-24) out of a bag. The fan automatically wins $100 and if the driver wins the feature from the starting spot drawn, the driver receives a $1000 bonus. If nobody wins the bonus on Saturday night the $1000 will be donated to the Make-A-Wish Foundation.

To keep track of all the latest happenings from the 23rd annual Southwest Contractors Trophy Cup be sure & follow the official Twitter of the event https://twitter.com/trophy__cup

The Merle Stone Chevrolet Thunderbowl Raceway is located at the Tulare County Fairgrounds on the corner of Bardsley and K Streets in Tulare, California. From the junction of SR 99 and SR 137, go west on SR 137. At South K go south one-half mile to the Fairgrounds.