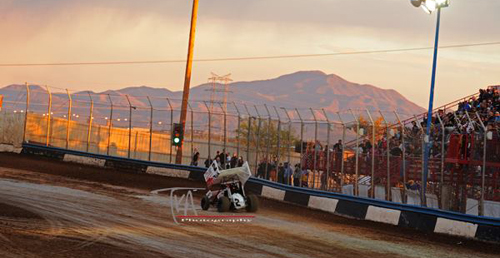 The Wheatley Chronicles – Volume III, No. 11

Lonnie Wheatley, TULSA, Okla. (March 10, 2015) – At least the first part of the old idiom rings true in 2015, with March roaring in a like a lion in the form of hideous weather over the greater part of the country.

Spring draws closer with each passing day though, and even with much of the nation still putting those snow shovels to good use, there is enough mud flying and the aroma of methanol wafting through select pit areas to offer hope to the rest of us.

This past weekend’s Sprint Car racing action, discuss in the form of the original Tuesday Top Ten…

1. Six in Six – Shane Stewart and Terry McCarl split Las Vegas honors before Brian Brown took Tucson cash on Saturday to make it six different winners in as many World of Outlaws events thus far in 2015 after Daryn Pittman, Donny Schatz and Brad Sweet opened the season with wins at Volusia.

None of those six are leading points though, with winless Joey Saldana taking a nine-point advantage over Sweet into this weekend’s Thunderbowl double at Tulare. Sweet’s KKR teammate Pittman, who won last year’s Tulare opener, is another two points back in third.

Rico Abreu, who won last year’s Tulare finale, is among the winless group that also includes Paul McMahan, Kerry Madsen, Danny Lasoski and Jason Sides among others. After missing Florida action to get his feet wet in the fendered asphalt ranks, Rico was 14th, 15th and 16th in his opening set of WoO events for the year at Vegas and Tucson.

2. Change Up – Several drivers stepped out of their know comfort zones over the past weekend.

Adding another name to the list of those abandoning the topless ranks in favor of winged racing, Tanner Thorson flipped in Friday night’s Silver Cup prelim at Chico before racing to an eighth-place finish among a field of 39 in Saturday’s Silver Cup finale. Thorson, who was among the Keith Kunz stable of killer Midgets in 2014, is expected to make his WoO debut this weekend.

3. Have Another One – Racers don’t do a good job of sitting idle. And with a race about 100 miles from home on an off weekend, Aaron Reutzel couldn’t resist. The current ASCS National points leader dropped in on Saturday’s Bronco Raceway Park card in Cleveland, TX, and took another win to run his early season total to four triumphs, tops in North American Sprint Car action thus far.

4. Long Tow of the Week – While Robbie Stillwaggon’s road trip from Burlington, NJ, to Las Vegas and Tucson by way of Volusia is noteworthy (1-for-8 in feature starts, he’ll need help with the diesel bill), it’s hard to top Seth Bergman’s long haul last week.

After finishing 12th in the weather-shortened ASCS double-dip at Bubba Raceway Park in Ocala, FL, on February 27, just seven nights later, Bergman’s No. 23 team showed up in the Silver Dollar Speedway pit area in Chico, CA, for this past weekend’s Silver Cup.

After a fifth-place run in Friday’s feature topped by Andy Forsberg, the 2,900-plus mile journey from right coast to left netted Bergman his first win of the year. And 2,900 miles in the Bergman rig surely resulted in a scratched fender or two somewhere along the way.

5. Cabin Fever Cure – While the weather outside has been frightful in a major portion of the country, it’s still difficult not to feel that festive spirit with all variety of PPV offerings to ease that Sprint Car racing fix. No fewer than the past five consecutive weekends (and more if you care to go International to Australia and New Zealand) and quite a few weekday nights have offered up some form of PPV Sprint Car pleasure and that trend continues this weekend with www.dirtvision.com bringing the World of Outlaws (and USAC West Coast non-wingers) from Tulare right into your living room.

6. The Grudge Match – After taking two of three Winter Challenge wins at Canyon Speedway Park to close out January, the only thing that could stop Ryan Bernal in Thursday night’s Sin City Showdown were a pair of untimely (or timely, depending upon your point of view) caution flags and a surging Stevie Sussex.

With the USAC West Coast and USAC Southwest Sprint Car forces squaring off on several occasions over the course of the year, the first round goes to the Southwest with Tempe’s Sussex nabbing the big win over a field of 31.

7. Anyone Still There? – After a month of being in the spotlight, life apparently still does go on in Florida. And for Danny Martin, Jr., that meant his first Top Gun Sprints win of the year on Saturday night over a field of 12 at Hendry County. It’s probably safe to say “The Hammer” was due for a win after four consecutive runner-up finishes in Top Gun action. Martin, Jr., along with fellow Top Gun contenders A.J. Maddox and Matt Kurtz, proved their mettle with strong runs against the invading ASCS shoes at East Bay and Ocala.

8. Ma Nature – It’s definitely the time of year to check the skies and radars before hitting the road, as a number of events have faced weather struggles. This past weekend, Lincoln’s Icebreaker was pushed back for the third week in a row, the USCS Frostbuster at Columbus, MS, that was to feature Sammy Swindell was nixed for the second week in a row and reset for a likely frostless May 29 with several 305 cards cast aside by nasty weather as well. And this weekend’s Port Royal opener has already been pushed back a week to March 21.

9. RVW – There are no weather woes in Southern California, are there? At least there weren’t Saturday, where Visalia’s Richard Vander Weerd stormed into the Demon’s playground and won the season-opening USAC/CRA Sokola Shootout at Perris Auto Speedway.

Vander Weerd did take one of those other wins last year with a May 3 triumph with Matt Mitchell the only other driver than Oval Nationals sweeper Robert Ballou to deny the Demon of wingless PAS glory since the 2014 season began.

10. In the Headlines – Tim Kaeding was in the headlines last week and it was nothing but positive news. First, it was announce that TK would reunite with Roth Motorsports in a second car for the upcoming WoO Cali swing. Then, to close the week out, word was released that Kaeding will team with Lunstra Motorsports to contend for the NSL title, making an already tough lineup that much tougher. The 2015 season is shaping up to be a tremendous year all around.

Putting this edition of TTT to rest, you can almost hear the engines firing now…