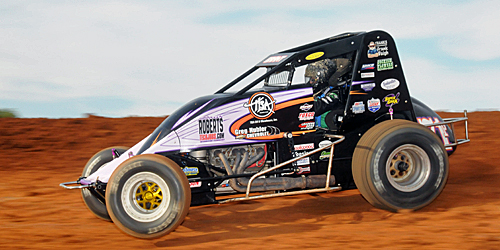 INDIANAPOLIS, Ind. (December 7, 2016) – After it was announced earlier today that Brady Bacon would join forces with the Dooling-Hayward No. 63 Sprint Car for approximately 20-25 Non-Wing races in 2017, later in the day it was Justin Grant and Dave Darland landing different seats for next year’s USAC campaign.

Darland will rejoin forces with the Phillips No. 71p will Grant teams up with Sam McGhee Motorsports for a run at the 2017 title.

The successful partnership between Dave Darland and Phillips Motorsports is reborn as the pair aim for the 2017 USAC AMSOIL National Sprint Car title.

Darland, the series’ winningest driver, and Phillips Motorsports put together a highly-successful three-year stretch between 2013 and 2015, scoring 17 USAC National Sprint Car victories, which is tied for the most wins during that particular three-year stretch.

However, in 2017, Darland makes his triumphant return to the seat of Steve and Carla Phillips’ black No. 71p. Together, the team won some of USAC’s most prestigious races including three consecutive triumphs at the Saturday night finale of “Sprint Car Smackdown” at Kokomo (Ind.) Speedway, the Budweiser “Oval Nationals” at Perris in 2013 and the “Tony Hulman Classic” at the Terre Haute (Ind.) Action Track in 2014.

Known as the “People’s Champ,” Darland is one of America’s most accomplished and popular racers. The Lincoln, Indiana native is a four-time USAC National Champion (1997 Silver Crown, 1999 Sprint and 2001-02 Midget) and is just one of six drivers to win all three of those titles in a career.

Darland is the all-time leader in consecutive years with a USAC National victory, an active 24-year streak which dates back to his first career USAC Sprint victory at Terre Haute in 1993.

“We can’t tell you how excited we are to be once again associated with everyone involved at Phillips Motorsports,” a statement from the Dave Darland Racing Facebook page said. “Steve and Carla are such hard working, dedicated and wonderful friends and we can’t wait to continue the success in the future as we had together back in 2013, 2014 and 2015.”

Sam McGhee Motorsports is proud to announce that Ione, California’s Justin Grant will take the wheel of the team’s No. 11 full-time during the 2017 racing season, which includes a run at the entire USAC AMSOIL Sprint Car National Championship schedule.

“We partnered with Justin midway through August of 2016 and had outstanding success during the months that followed,” team owner Sam McGhee said. “Justin picked up SMM’s very first USAC National Car win during the ‘4-Crown Nationals’ at Eldora speedway, which we are very excited to build off as we aim for a series championship during the 2017 season.”

For 2017, the car will have a slightly new look as the team switches over from No. 17 to No. 11, which was Sam’s number when he raced in USAC’s Ford Focus Midget series from 2011-2013. In fact, Sam, now 17 years old, scored seven feature victories en route to the USAC Ford Focus Young Gun Midget series championship in 2011.

In the six USAC National Sprint Car starts Grant made with SMM in 2016, the team never once finished outside the top-8. Four of those finishes resulted in top-five finishes. In local Indiana sprint car competition, Grant took wins at Bloomington in his first ever start for SMM as well as the final sprint car race of 2016 in the state of Indiana at the “Kokomo Klash.”

The 26-year-old Grant owns four career USAC National Sprint Car victories and is the 2010 series “Rookie of the Year.”

“Racing for Sam the latter part of 2016 was a great opportunity for me to build my confidence again,” Grant said. “Sam gives me a great racecar to drive night-in and night-out and I couldn’t be happier having the chance to race the full 2017 schedule for him and the McGhee family.”