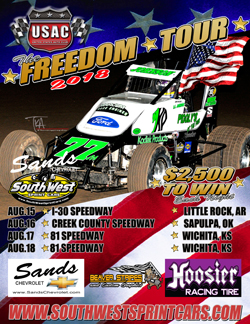 Lonnie Wheatley, TULSA, Okla. (July 26, 2018) – The Sixth Annual USAC Southwest Sprint Cars “Freedom Tour” is right around the corner with the four-race set throughout Arkansas, Oklahoma and Kansas firing off in less than three weeks.

Little Rock’s I-30 Speedway will host the opening round of action on Wednesday night, August 15, before competition shifts to Sapulpa, Oklahoma’s Creek County Speedway on Thursday night, August 16.  The intense week of non-wing 360-ci Sprint Car racing wraps up with two nights at Park City, Kansas’ 81 Speedway on Friday and Saturday, August 17-18.

Arkansas’ I-30 Speedway will host the opening leg of the “Freedom Tour” for the second consecutive year.  Last year’s inaugural USAC Southwest event at I-30 Speedway was a barnburner with Charles Davis, Jr., taking advantage of a late R.J. Johnson miscue and then denying local legend Tim Crawley over the closing laps to secure the win.

Round Two is set for Creek County Speedway, a ¼-mile clay oval near Tulsa that has hosted the USAC Southwest Sprint Cars “Freedom Tour” from the outset in 2013.  Local contenders have denied the Arizona contingent in four of five previous events with Sapulpa’s Blake Hahn becoming the first repeat winner at Creek County last year after topping the 2015 edition as well.  Oklahoma’s Danny Smith scored the 2013 win before Brady Bacon took 2014 honors.  Only R.J. Johnson has turned back the home-state forces with a 2016 victory.

The week will wrap up with a pair of nights at 81 Speedway near Wichita, KS, which is another “Freedom Tour” fixture from the beginning.  New Mexico’s Rick Ziehl topped the inaugural event in 2013 before Yuma, Arizona’s Mike Martin went back-to-back in 2014 and 2015.  After a 2016 rainout, R.J. Johnson and Charles Davis, Jr., took victory honors last year with “The Chargin’ One” parking it in the beer garden much to the delight of a capacity crowd to put an exclamation point on last year’s “Freedom Tour”.

Information regarding each of the Fifth Annual Freedom Tour tracks is available at:

Additional information regarding the USAC Southwest Sprint Car series is available at http://www.southwestsprintcars.com/.