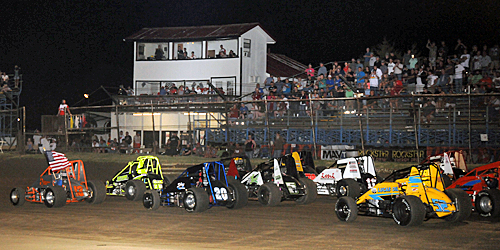 Lonnie Wheatley, TULSA, Okla. (August 14, 2017) – Traditional Sprint Car racing fans throughout Arkansas, Oklahoma and Kansas are in for a rare treat this week with the fifth rendition of the USAC Southwest Sprint Cars “Freedom Tour”.

The wingless Sprint Cars will sling the clay for four nights at four different tracks beginning on Wednesday night, battling it out for a $2,500 winner’s share each night with a minimum of $250 to start each feature event.

The action begins with Little Rock’s I-30 Speedway hosting the “Freedom Tour” for the first time on Wednesday.  From there, action shifts to Creek County Speedway near Tulsa on Thursday night and then Wichita’s 81 Speedway on Friday night.  The mini-series wraps up on Saturday night at Caney Valley Speedway near the Oklahoma-Kansas line in Caney, KS.

There will be some USAC National flavor in the mix over the course of the week as Cali native Chad Boespflug will mix it up with the Arizona contingent that include the likes of reigning series champion R.J. Johnson along with Charles Davis, Jr., Mike Martin, Stevie Sussex, Shon Deskins, Tye Mihocko, Dennis Gile and Chris Bonneau among others.

The Southwest invaders will face stiff competition at each track from the local forces, with Memphis shoe Anthony Nicholson among those set for another full tour of “Freedom Tour” duty after taking in last year’s full slate of events.  A past Short Track Nationals preliminary feature winner at I-30 Speedway, Nicholson finished among the top ten in all three of last year’s completed “Freedom Tour” features.

I-30 Speedway and Caney Valley Speedway will both be hosting the USAC Southwest Sprint Cars “Freedom Tour” for the first time while Creek County Speedway and 81 Speedway have been series staples since the outset in 2013.

Information regarding each of the Fifth Annual Freedom Tour tracks is available at:

Additional information regarding the USAC Southwest Sprint Car series is available at http://www.southwestsprintcars.com/.