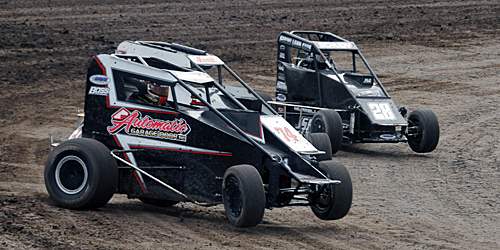 The Wheatley Chronicles – Volume V, No. 21

Lonnie Wheatley, GARDEN CITY, Kan. (May 27, 2017) – Ol’ Darrell Waltrip’s infamous “Vortex Theory” was put to the ultimate test on the opening night of the POWRi West vs. RMMRA “Midget Roundup” at Airport Raceway on Saturday night.

While the theory held up remarkably well for quite some time as radar indicated otherwise, it finally succumbed to Mother Nature with the skies opening up as the second and final Midget “B” Main took to the 1/6-mile clay oval at 9:20 p.m.

As storms approached from the west, a robust field of 39 Midgets signed in for the night.  Heats proceeded as storms seemingly wrapped around Airport Raceway on both the north and south sides, with lightning flashing well to the east during “B” Main action before the rain ultimately kicked in and became too much too overcome.

With two “B” Mains on tap, the trio of Wesley Smith, Brent Rees and Blake Edwards battled throughout for the win with Smith using the bottom to narrowly deny the high-riding Edwards at the stripe.

The balance of the event including the second Midget “B” Main and the Midget “A” Main along with Non-Wing Micro and 1200-Mini Sprint “A” Mains will be completed before Sunday’s full card with racing action getting under way at 6:30 p.m.

Balance of Program including Second “B” Main and “A” Main postponed by rain to Sunday, May 28.