Wayne Johnson Wins a Wild One at Red Dirt Raceway 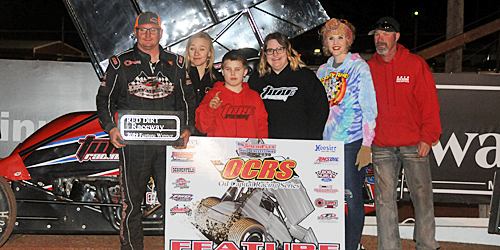 It all came down to a frantic last lap, with race leader Chappell turning a quick 360-degree spin after contact in traffic exiting turn two and then Johnson surging back into the lead in a wild scramble to snare the win after pacing the initial 25 circuits.

“Chappell got what he deserved, he got spun by a lapped car,” Johnson said of the final circuit bedlam.

The late change of plans netted the Oklahoma City native a $1,750 payday including $1,500 for topping the OCRS main event and then another $250 bonus for decimating a Late Model in a four-lap Sprint Car versus Late Model match race.

“This is one of the tracks I started out at.  Since I’ve moved back to Oklahoma, it’s pretty neat to get back to some of these tracks that I haven’t been to in a lot of years,” Johnson commented.  “Cody (Brewer) and his people here have done an amazing job with this place.”

Chappell led the feature field to the green flag from the pole position, but it was Johnson capturing the early lead from the front row outside aboard his No. 2c Sprint Car.

From there, Chappell stayed within striking distance throughout with cautions after laps 13 and 14 the only thing slowing the torrid pace around the topside of the ¼-mile clay oval with Layne Himebaugh the only one to keep the lead duo within sight for any extended amount of time.

Denying one bid from Himebaugh for second, Chappell moved in on Johnson with traffic in play as the laps clicked off and pressed for the point.  And when he sensed opportunity, Chappell threw a slider for the lead that resulted in turn four contact on the 26th lap.

Johnson held steady in second though right behind the new leader and with a gaggle of a half-dozen lapped cars directly in front of Chappell, four more circuits around the Red Dirt Raceway oval was an eternity.

Johnson threw his own slider in three and four coming to the white flag only to come up short.  And, as Chappell tried to squeeze under a lapped car exiting turn two, contact ensued with Chappell looping it.  In the mad scramble that followed down the backstretch, Johnson slipped back out front and took the win just a car-length ahead of Chappell.

Himebaugh settled for the show position with Danny Smith and Andrew Deal rounding out the top five.

Heat Moments:  Ripping the lip is customarily the most stylish and speedy way to navigate the Red Dirt Raceway oval and this afternoon/evening card was no exception with Clark fending off Johnson to win the first heat and then Chappell holding off fellow past series champion Whit Gastineau to win the final heat; Filling in for Matt Moore, Matt Sherrell bounced back from an opening lap spin in the first heat to salvage a fifth-place finish, good enough to secure a decent “B” Main starting position; Defending series champ Alex Sewell and Mickey Walker made turn four contact in the second heat that left Walker with front end damage and sent Sewell to the work area for the balance of the race – both transferred on out of “B” Main action.

“B” Main Moments:  After Edwards securely won the First “B” Main, Casey Wills paced the second “B” Main until the white flag lap when Wood, Jr., finally worked traffic to his advantage to take command in an entertaining battle for the W.

13 Laps – Mickey Walker bounces to a stop in turn one.

14 Laps – Joe Wood, Jr., spins it in turn four, just as Whit Gastineau pulls it pitside after a quick 360 exiting turn two on the previous restart relegated him from fourth to midpack.

“A” Main Hard Charger:  Alex Sewell picked up the honors by rallying from 18th to finish seventh.

The Wheatley Chronicles brings insight and highlights from all variety of racing series throughout the nation in 2019 and beyond along with the Open Wheel Power Rankings.  Please send any comments, questions or advertising inquiries regarding The Wheatley Chronicles at www.sprintcarmania.com to Lonnie Wheatley at lonniewheatley@gmail.com.