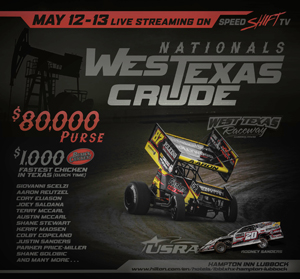 Lonnie Wheatley, LUBBOCK, Texas (May 6, 2020) – Anticipation continues to build as does the field for next week’s West Texas Crude Nationals at Lubbock’s West Texas Raceway.

The current field of Sprint Cars for the event presented by Josh Baughman that takes place on Tuesday and Wednesday, May 12 and 13, now stands at 38 with Shane Stewart and Blake Hahn among the latest to accept invitations.

A field of 32 USRA Modifieds will be in action as well.

Sapulpa, Oklahoma’s Hahn, a regular contender on the Lucas Oil ASCS National Tour, has a penchant for stepping up in big races with wins in the last two editions of Little Rock’s Short Track Nationals among his triumphs.

Channin Tankersley has joined the mix as well along with another trio of California racers including Blake Carrick, Tanner Carrick and J.J. Ringo to bring the Cali representation to eleven.

The What:  West Texas Crude Nationals featuring winged 360-ci Sprint Cars and USRA Modifieds, both divisions by invitation. Limited to ten pit passes per car.   Sprint Cars race for a $4,000 winner’s share and $800 to start the feature on Tuesday with the ante upped on Wednesday to $6,000-to-win and $1,000-to-start.  USRA Modifieds race for $1,000-to-win each night and $200-to-start.

The Where:  West Texas Raceway in Lubbock, TX, located south of Lubbock, TX, on US 87 to FM 1585, then east to Frontage Road and then 0.3 miles north.

How to Watch:  While there will be no grandstand admission in accordance with current COVID-19 restrictions, the event will be available via PPV at https://www.speedshifttv.com/.

RR Tires: Any ASCS or World of Outlaws approved tires

LR Tires:  Any ASCS or World of Outlaws approved tires

Fuel will be available at the track.

Format is the All Star Circuit of Champions format.  Qualify only against cars that will be in your hot lap group and subsequent heat race; groupings determined according to pill draw.  Heat races will invert four cars with fastest qualifier among group starting second row outside.  Up to 40 cars will result in four heat races with a maximum of ten cars per heat race, five transfer from each heat to the “A” Feature.  More than 40 cars results in five heat races with four transferring from each.

Each heat winner and the fastest transfer from each heat AND the top two from overall time trials will advance to two five-car Dashes with a random draw for Dash starting position.  Dash finishes will set front rows of “A” Feature event with non-Dash cars that have qualified for the main event lined up after the Dash cars by heat race finish (2nd place finishers, then 3rd place finishers, etc.).  Starting position amongst the same place finishing cars determined by overall qualifying time.

“B” Main transfers tag the back of the “A” Main by finishing position.

Modifieds will run a draw/redraw format.

The Contingency Prizes:  In addition to a purse exceeding $80,000, a number of contingency prizes will be up for grabs as well including:

Maxim Chassis Winning Move of the Race – $250 per night.

Racer Accommodations:  Cooks Garage, located right across from the racetrack at 11002 Highway 87, Lubbock TX 79423, will have areas available to park rigs overnight and areas to wash cars.  The restaurant and bar will be open as well on Tuesday and Wednesday.  Please use the south entrance.  For additional questions, contact Trevor Cook at 806-893-2491.

For additional information regarding the West Texas Crude Nationals, contact Josh Baughman at 432-258-3695 or via email at jbaughman@hollywood-tx.com.