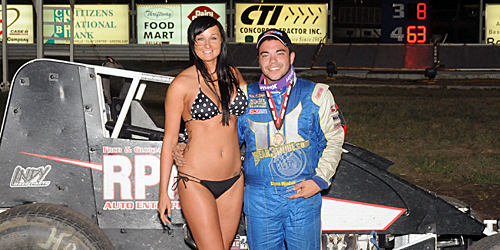 The Wheatley Chronicles – Volume III, No. 70

Lonnie Wheatley, BELLEVILLE, Kan. (July 31, 2015) – If ever a driver felt a track owed him one, it might well have been Chris Windom at the Belleville High Banks.

Last year, Windom put on a show in the USAC Silver Crown “High Banks Hustle” atop the storied Belleville High Banks speedway, only to have an apparent victory snatched away when the fuel tank ran dry in the closing rounds.

That wasn’t going to happen again.

And the Canton, IL, native put on a dominant display in Friday’s Third Annual High Banks Hustle, settting quick time aboard the Fred Gormly/RPM Auto Enterprise No. 98 Champ Car and then leading all 50 laps of the feature event in commanding fashion.

“This one feels good, especially after last year,” Windom commented in victory lane.

There was little doubt about it from the outset.   Windom stopped the clocks at 17.356 seconds in qualifying, more than two-tenths of a second faster than second qualifier and current USAC Silver Crown points leader Kody Swanson.

Windom pushed his Rob Hart-wrenched entry into the lead on the opening lap and set sail, leaving the rest of the field in the distance.

When the race’s only caution flew after 41 laps, Windom had second-place runner Jerry Coons, Jr., in his sights less than a straightaway ahead (or three-quarters of a lap behind from the Coons standpoint) as his 14-second advantage was erased.

“After that caution, I was just waiting on something to happen like it did last year,” Windom commented.

There were no black cats crossing Windom’s path this time though, as he promptly checked out and breezed to the finish line over the final pair of circuits to take the checkered flag 1.297 seconds ahead of Coons.

In the distance behind Windom, the battle for second through eighth waged throughout with Coons, Kody Swanson, Justin Grant, Shane Cockrum, Kevin Thomas, Jr., C.J. Leary and Brady Bacon all within a straightaway.

Coons ultimately crossed the stripe second with Grant battling past Swanson over the final half to take the show position. Cockrum rounded out the top five with Leary fending off Bacon for sixth while Thomas, Jr., was the final car on the lead lap after bringing out the race’s only caution with his 360-degree spin in turns one and two in the closing circuits.

“A” Main Cautions: One

Lap 41 – Sixth-runner Kevin Thomas, Jr., does a 360-degree spin in turns one and two to bring out the race’s only caution, erasing Windom’s 14-second advantage.