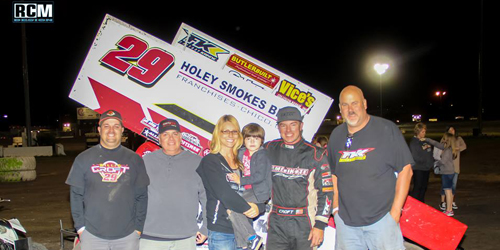 Elijah Jones, CHICO, Cal. (April 30, 2016) – 35 winged 410 sprint cars signed into the pits for Silver Dollar Speedway Points Race #4, the opening night of the Dave Bradway Jr. Memorial Weekend. When it was all said and done it was Willie Croft’s familiar #29 rolling into Victory Lane on the front stretch.

At the drop of the 25 lap 410 Sprint Car A-Main Event, it was Auburn, CA driver Andy Forsberg lined alongside Campbell, CA driver Bud Kaeding on the front row. Forsberg would get the jump and lead the first five circuits around the racetrack.

On lap 6 Bud Kaeding was able to take the lead away from Forsberg. Bud though, would relinquish the lead as well, this time, to the #75 of Sean Becker on lap 11. Becker looked poised to pick up yet another victory at Silver Dollar Speedway, but Willie Croft had other ideas.

Croft began to close on Becker and on Lap 19 Croft would take over the lead and not look back as he went on to win his 2nd race of the season at Silver Dollar. Becker would have to settle for the 2nd spot, while Bud Kaeding finished 3rd, Rico Abreu 4th, and Andy Forsberg rounded out the top five finishers.

The scariest moment of the night occurred during the 12 lap B-Main Event for the Sprint Cars. Michael Ing lost the handle in turn two and would spin in front of the entire field. He collected the #12 of Jarrett Soares and the throttle would then hang wide open on the #21 of Ing launching him towards the infield. Before the car could get to the infield though, its path was interuppted by the #5 car of Brian Boswell who was trying to sneak by on the inside. The two cars made heavy impact but would both come to a stop. All drivers involved were ok. Jarrett Soares did walk to the ambulance complaining of knee pain.

Justyn Cox would win the B-Main Event. Heat Race Winners included Kyle Hirst, Dominic Scelzi, Willie Croft, and Bud Kaeding. Rico Abreu was the final car to hit the track in Time Trials and would go Quick Time with a lap of 11.480. Abreu knocked Andy Forsberg who was the first car out to qualify off the top spot with that lap.