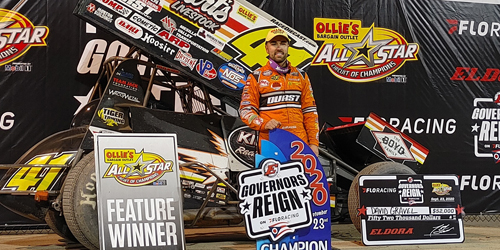 Watertown, Connecticut’s David Gravel etched his name in the Eldora Speedway history books twice in the last two days, first setting a new Eldora Speedway track record of 12.599 during the Governors Reign opener on Tuesday, September 22, then trumping that statistic with a victory in the Governors Reign finale the following evening, scoring a $52,000 top prize in the process while also earning a fourth-career Ollie’s Bargain Outlet All Star Circuit of Champions presented by Mobil 1 victory.

The pilot of the Jason Johnson Racing/Weikert’s Livestock/Durst/JRC Transportation/High Performance Lubricants/The Boyd Family/Mesilla Valley Transportation/Saich Family/No. 41 sprint car led all 35 circuits of the Governors Reign finale, but certainly not without a challenge, forced to navigate through doses of heavy traffic, all while trying to fend off a late surge by Elk Grove, California’s Kyle Larson.

“I just gotta thank this entire team. I am confident we had one of the best cars all week,” David Gravel said in Eldora Speedway victory lane. “To come out here and set two quick times, one a track record, and get a win says a lot about this team. I’m happy to win tonight rather than last night because tonight pays way more. This field was just as stout as any field we’ve seen all season. All of the best are here. It feels really good to beat the best. Anything that pays over 50 grand is a crown jewel to me…”