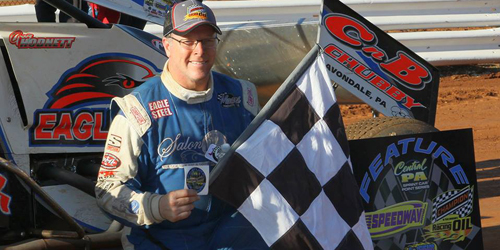 from Lincoln Speedway PR, ABBOTTSTOWN, PA 2/28/16 – Six weeks removed from the largest snowstorm to hit Central Pennsylvania, Lincoln Speedway wasn’t fazed as the Icebreaker 30 for 410 Sprints officially kicked off the dirt track season Sunday afternoon in front of a very big crowd who enjoyed sunny skies and temperatures around 60 degrees.

And on the race track, it was Spring Grove racer Greg Hodnett leading all 30 laps to capture his second consecutive win in the Icebreaker 30.

Aboard the Heffner Racing Enterprises owned, No 27, Hodnett took advantage of good starting spots, kept out of trouble on the race track and earned the $4,000 payday for his 30th career win in the Pigeon Hills.

“I still really struggle here, we just took advantage of some good starting spots today,” said the 2015 Central Pennsylvania Sprint Car Champion. “We are very, very fortunate to be up here today because it’s a tough race track. There are a lot of good competitors here and it’s a very technical race track, which is why Fred (Rahmer) always went good here.”

While it may have looked easy for Hodnett out front, that wasn’t the case for many other drivers in the field as the event saw one red flag, seven cautions and a fuel stop.

Adam Wilt and Hodnett lined up on the front row and two straight times saw Hodnett grab the lead in turn one only to have cautions realign the field.

On the third restart, Aaron Ott and Bill Jones, Jr. both flipped in turn one, Neither driver was injured.

Four cautions during laps three through seven kept the field slow but defending track champion Brian Montieth was blasting his way through the field after starting 11th.

Following the fuel stop, Montieth took fourth spot as he continued his charge to the front as Hodnett worked through slower traffic at the rear of the field as Duncan, Wilt and Montieth were in a great battle.

Duncan lost the runner-up spot on a lap 20 restart as Wilt and Montieth drove by but Duncan’s great run ended with a spin on lap 22.

Hodnett was home free over the final eight laps as he picked up the win aboard the Lelands.com/Trone Outdoor/Eagle Steel sponsored sprint.

“I couldn’t run real hard because it would just spin but I figured it would be real tough for those guys to get around me,” Hodnett stated. “So I just kind of cruised and felt like I could go harder if I needed to or felt pressure. We came here way different than we would ever would have before. We wanted to try something totally different and it worked out okay.. I think we’ll come back with it next time.”

Heats for the 24 410 sprint cars were won by Scott Fisher, Brian Montieth and Gerard McIntyre, Jr.

Lincoln Speedway returns to action next Saturday, March 5th with another 410 Sprints only program beginning at 2PM. Gates open at noon. A Sunday, March 6th rain date will be used if needed.