Outlaws at Ocean Under Water 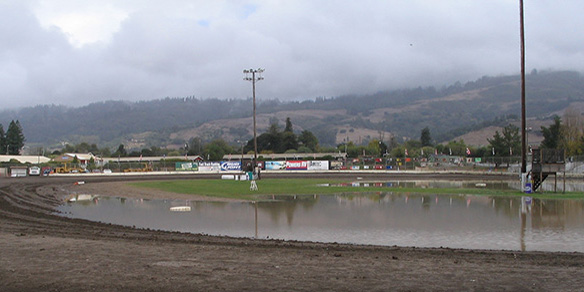 WATSONVILLE, CA – March 22, 2018 —The World of Outlaws Craftsman Sprint Car Series has lost out to western rains yet again, as storms and heavy rainfall at Ocean Speedway have flooded the race track surface and pit area. With no time to dry out the facility, officials have canceled Friday night’s event. The Ocean Outlaw Showdown has been canceled and will not be rescheduled.

Ticketholders for Friday’s race will receive a credit to their MyDirtTickets.com account to apply to another World of Outlaws race at worldofoutlaws.com/tix. Those who need assistance or would like to request a refund, should call 844-DIRT-TIX, Mon.-Fri, 9-5PM EST. According to local meteorologists the storm passing through California, known as “Pineapple Express” because of its sub-tropic origins, has presented the biggest rainfall of the season but will likely be the season’s last.

The Greatest Show on Dirt continues its West Coast Swing — and its 40th anniversary season — on Saturday, March 24, at Bakersfield Speedway. And the forecast is good! Tickets are still available.