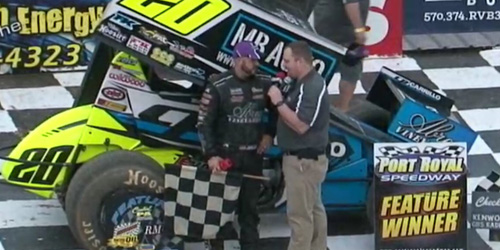 By: Justin Snyder/Port Royal Speedway, PORT ROYAL, Pa. (March 30, 2019) – Ryan Taylor is a multiple time winner at the Port Royal Speedway. With 5 career wins at ‘The Speed Palace’, Taylor knows his way to victory lane on the front stretch.

However, he hadn’t been to victory lane at the track since capturing the biggest victory of his career in the 2013 Dream Race worth $11,580.

That all changed on Saturday when Taylor lead flag to flag for 25 laps on a daytime surface to best weekend invader Dale Blaney and a hungry Lucas Wolfe to claim his 6th career Weikert’s Livestock 410 series victory at the Juniata County oval.

“This thing was rolling around the top really nice tonight,” said Taylor, a Perkasie, Pa native. “Everybody did their part tonight and all of our sponsors who put us in this position, I just can’t thank them enough”

Taylor and Wolfe led the field to the green and Taylor jumped out to a quick lead, while 4th starting Jared Esh moved into second to set the pace. However, Brock Zearfoss would slow on the front stretch after only 2 laps to bring out the first caution.

Once back to green flag action, Taylor would once again jump out to a big lead, using the top to fly around the track. Meanwhile Wolfe would move into the 2nd position on lap 3, while 6th starting Blaney moved into 4th.

Setting a quick pace, Taylor approached lap traffic on lap 8 and attempted to maneuver around Brent Shearer, allowing Wolfe to attempt a slide job in turns 3 and 4. The cars nearly made contact, however Taylor never flinched and powered off the top of the speedway to once again stretch out his lead.

Shearer would spin 5 laps later in turn 3 to once again bunch the cars up under caution. This would serve as the final caution of the race.

On the restart, it was Blaney making his move, sliding Wolfe in turns 1 and 2 to move into the runner up spot, attempting to pick up his first victory in the Sam McGhee Motorsports #11 in only his 4th start with the team.

However, Taylor was focused on the task ahead and never looked back.

“I didn’t know who was behind me and I never looked at the scoreboard,” said Taylor of the hard charging Blaney. “So many times a race can be lost at the end of a race because people start worrying about what is going on behind them”

“I just worried about where my car felt the best, where I had the most grip, where I need to maybe peddle it a little more on exit as it was starting to blow off a bit and I just kept my tires on the ground and tried to save it for the whole race.”

Taylor stretched his lead over Blaney to over a second as he approached lap traffic again on lap 20. And while Blaney was able to cut the lead in half over the final few circuits, he never really was able to muster much of a challenge as Taylor took the $3600 payday for the win.

Coming off a season that saw Taylor take a bit of a step back schedule wise, it was a great start to the season for his team. While he’s not ready to commit to battling for a track championship, it’s night’s like these that will make that a possibility going forward

“I don’t know about a championship quite yet and that’s kind of a longshot goal, but we’re going to try and not miss any Saturday nights and race here every week. We really only have one motor and one car, but we’ll make it happen and if 3/4 of the way through the season we feel we’re in contention, we’ll really put our nose down and focus on that,” said Taylor.

For Blaney, while he came home as a runner-up, getting more valuable seat time with a new team and contending for wins was a win in itself. After a year that saw the National Sprint Car Hall of Fame driver only run 10 races, he’s prepping to once again head out and chase the Ollie’s Bargain Outlets Tour Championship.

“It was a real good night we had out here against a great field of cars,” said Blaney. “For only being my 4th night out with these guys, I think we got a real nice baseline going forwards. Nights like these will allow for a lot of success hopefully.”

“I got great cars and a great team, so it’s ultimately up to me to get back up to speed and make good decisions on the track. Tonight I felt like we all made good decisions as a team and it was a positive learning step.”